Jiří Pospíšil was born in Třebíč, Czech republic and grew up in Nárameč and lately Brno, Czech republic. He received his undergraduate education at Masaryk University in Brno, Czech republic, where he also obtained his Master degree in organic chemistry under the guidance of Prof. Milan Potáček. Prof. Potáček did not only introduce him into the field of academic research and allowed him to conduct undergraduate research in his group for nearly four years, but also allowed him to undertake three short research stays in academia and industry. First, three months as a Socrates-Erasmus student in Louvain-la-Neuve, Belgium, under the guidance of Prof. István E. Markó; second, three months under the guidance of Prof. Kent S. Gates at Missouri-Columbia University, MO, USA; and finally one month in IVEX Ltd in Opava, Czech republic. After finishing his undergraduate studies, he undertook his PhD studies as Rhodia-Organics Fellow at Université catholique de Louvain, Belgium, with Prof. István E. Markó. He then moved to the laboratory of Prof. Alois Fürstner at Max-Planck Institute für Kohlforschung, Germany. In October 2008, he started his independent research carrier as F.S.R.-FNRS research fellow at Université catholique de Louvain, Belgium. From October 2012, he worked as a CNRS research fellow for 10 months in group of Professor Samir Z. Zard at Ecole Polytechnique in Paris, France, before he accept an offer from Palacky University in Olomouc, Czech republic. From January 2014 he is also a member of research Centre of Region Hana for Agricultural and Biotechnological research, and Institute of Experimental Botany, Academy of Science, Czech Republic. His research interests are ranging from natural product synthesis and novel synthetic methodologies till their applications in the field of medicinal and agrochemical chemistry.

You can see my CV. 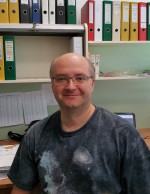